Delta Rhythm ‘n’ Bayous Alliance, a non-profit laying the foundation for tourism-based economic development, provides this update:  HR 1054, a bill entitled To Designate a Portion of Highway 65 as the “Delta Rhythm & Bayous Highway”  just overwhelmingly passed the House on Tuesday, February 21, 2017, and has been ordered transmitted to the state Senate.  The bill was filed by lead sponsor Representative Vivian Flowers on December 21, 2016.  Co-sponsors in the House of Representatives are LeAnne Burch of Monticello, Kenneth Ferguson of Pine Bluff, Mike Holcomb of the Pine Bluff area, Mark McElroy of Tillar, and Chris Richey of West Helena.  The lead sponsor in the Senate is Eddie Cheatham of Crossett; co-sponsors are Senators Stephanie Flowers of Pine Bluff and Trent Garner of El Dorado.

The Delta Rhythm ‘n’ Bayous Alliance draws on the region’s history of a “profound set of musical contributions” from areas along U.S. Highway 65 South — and parallel to the world’s longest bayou, Bayou Bartholomew.  These artists and contributions, all significant in their respective genres, deserve far more recognition many have received thus far — “hidden treasures!” as Mr. Cunningham calls them.  Although he has in mind the beauty of these artists and their accomplishments, some may see the tourism-based business opportunities as a second meaning of “treasures.”

The Delta Rhythm ‘n’ Blues Alliance was incorporated as a nonprofit in February, 2016.  According to Mr. Cunningham, the alliance “began a process to plan ways in which the major towns and cities in this corridor could highlight these important music and bayou distinctions.  Effectively, this creates a much needed regional brand for the Southeast Arkansas Delta.  With the proper marketing and relevant interpretative venues, this could lead to major boosts in tourism revenue. Similar initiatives have been implemented in Mississippi, Kentucky, and Tennessee with major success in generating tourism revenue.”  The region targeted by the alliance also includes part of western Mississippi and northeastern Louisiana.  Pine Bluff is one of two anchor cities in this effort; the other is Greenville, Mississippi.

The board members are as follows: 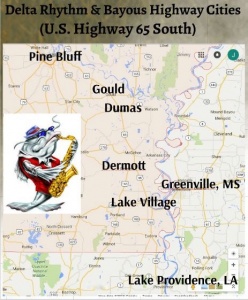 They can be contacted through their Facebook page:  https://www.facebook.com/deltarhythmnbayousalliance/ .

The alliance has developed partnerships with cities along Highway 65:  Pine Buff, Gould, Dumas, Dermott, and Lake Village, Arkansas; Greenville, Mississippi; and Lake Providence, Louisiana.   Additional partnerships have been formed with the Southeast Arkansas Arts and Science Center, the Arkansas Department of Parks and Tourism, the UALR Center on Race and Ethnicity, and UAPB Arts Department.”  As Mr. Cunningham describes, “these partners allow us to have built- in expertise and guidance in history, arts, and geology in this project.  We are able to apply for grants and projects separately or in partnership with these entities.  This strengthens application packages and proposals to funders. One of Arkansas foremost historians, Dr. John Kirk, the chair of the history dept. at UALR is directly tied to this project.  He is from Britain.  We have had conversations about how this project can partner with blues initiatives in Britain.  Really, the possibilities are endless.”