How many people personally know a fashion designer and tailor?  How about a designer who custom tailors African and European ethnic clothing?  Tuxedos, wedding dresses, and band uniforms?  Even shoes and jewelry?  If you live in Pine Bluff, Arkansas, maybe you do know that designer if you have crossed paths with Dorothy J. Johnson Anderson.  She is the force behind Dorothies Custom Dezignz in Pine Bluff, Arkansas.

It is difficult to say what is more amazing, Ms. Anderson’s variety of creations (tuxedos? who makes tuxedos? shoes?) or the fact that she does not use a pattern.  She is one of those rare talents who can look at a person and recommend a flattering style and even quickly assess measurements.  And then she just creates the fashion; she simply makes it happen with virtually nothing to go on except the materials in her hands.  You might have already guessed this, but Ms. Anderson is an artist as well as a tailor.  Indeed, she holds an Associate of Arts degree from Phillips County Community College and a Bachelor of Science in Art Education from the University of Arkansas at Pine Bluff (UAPB).  Though her original plans were to teach art, she has spent her life applying her talent as an artist and fashion designer.

Dorothy Jean Johnson (now Anderson) lived her first ten years in Clarksdale, Mississippi. Her mother was a master seamstress; her father, a master carpenter.  So it is no surprise that, from an early age, young Dorothy’s artistic skills became apparent even by her preschool years. She drew pictures frequently.  Before the age of five, Dorothy started making her own paper dolls, using her artistic skills to draw them on cardboard and cut them out; she drew their clothes on paper and found a way to attach them to the dolls.  When playing “store” with her three sisters, they were business owners, apparently entrepreneurial from a young age.  Dorothy used her artistic skills to draw and cut out the paper money while small rocks served as the coins.  These creative children used an old wooden ironing board placed across chairs to serve as the counter.  Pretty green grass became the fresh greens, and canned groceries from her family’s pantry were, well, the canned groceries at the make-believe store.

Not surprisingly, Dorothy taught herself to sew and started doing so at a young age.  She was still a small child (perhaps as young as four or five) when she started making hand-made clothes. While still elementary school age, Dorothy had already made her first two dresses by hand.  Soon after, she started using her mother’s paddle sewing machine to make clothes regularly.

Around 10 years of age, Dorothy Jean Johnson’s family moved to Helena, Arkansas.  Her artistic and sewing skills continued to grow.  She even made her own coats, capes, and hats except when she had a hand and wrist injury due to a fall.  Over time, Dorothy even made her own comforters and pillows.  By her teen years, Dorothy was making wedding dresses. Really, she was already a fashion designer.

After high school, Ms. Anderson (though still Johnson at the time) earned an  Associate of Arts degree from Phillips County Community College in Helena, Arkansas.  She then moved to Pine Bluff to attend college at UAPB where she earned a Bachelor of Science in Art Education.  Originally, Ms. Anderson planned to teach art, life’s turns took her away from an educational career.  She has, however, always been involved in artistic expression and creation through tailoring and fashion design.  It’s hard to say exactly how and when she started this line of business, mainly because she has always designed and made clothes.  She never had a time when she didn’t do this.  She just gradually collected customers.

At first, though the flow of business was steady, a young entrepreneur just starting out needed steady income with benefits. She also has a bent toward community, and she ultimately became a police officer in 1987. During this time, she continued doing alterations, tailoring, and fashion design; her business was known as The Virtuous Seamstress. A few years later, she left law enforcement and, in 1990, officially opened her own business; it was part time, initially, but it was now a dedicated effort.  She renamed it Dorothies Custom Designs, with spelling choices made to ensure a unique business name, at least what she believed to be unique at the time.  (She would later change the name to D. C. Dezignz or Dorothies Custom Dezignz, in 2002, for a truly unique business name and settled on Dorothies Custom Dezignz in order to have an available website domain to match the name.)

By the early 1990s, business was picking up as word spread of her rare talent.  As it turns out, Ms. Anderson was also skilled in running a business – and a small, individually-owned business in this corporate world, no less.  Community and government leaders began to recognize her as a source of business knowledge as well as an artist and designer.  Much of this recognition started with Ms. Anderson’s relationship with the Good Faith Fund, a nonprofit economic development organization that assists individuals with their small businesses in rural communities.  Over the years, Ms. Anderson earned several awards through the Good Faith Fund, including the Business Growth Award. 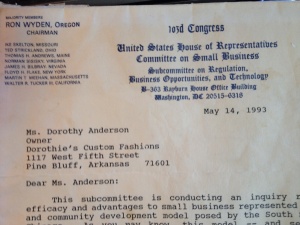 In June of 1993, she was asked by the President of the Good Faith Fund to testify before the 103rd Congress’ House Committee on Small Business, Subcommittee on Regulation, Business Opportunities, and Technology, about micro-businesses’ experiences with mainline banking.  As Ms. Anderson explains, this committee sought to learn “how community development banking models could best serve small businesses in economically depressed areas.”  And so, before this committee and on C-SPAN, too, Ms. Anderson testified about the trials of small business owners dealing with mainline banks.  Of the many points she made, one was that, if a business owner doesn’t already have a significant amount of her own money, then she cannot get money through a loan for her business.  Her way of putting it was,  “If you ain’t got it, you don’t get it.”

Regardless of the challenges a small business owner faces, Ms. Anderson’s fashion lines flourished.  By January of 1994, Dorothies Custom Designs made its debut.  News coverage came fast with articles about her talents and business in the Arkansas Democrat Gazette, the Pine Bluff Commercial, and the Unity Forum (former newspaper in Pine Bluff).

Over the next two years, Ms. Anderson was awarded twice by Arkansas governors.  In 1995, she earned the 1995 Arkansas Quality Award – Quality Interest Award (for Expressing Interest in Adopting and Applying Quality Principles), awarded to her by Governor Jim Guy Tucker.  The following year, she was earned the 1995 Arkansas Quality Award, awarded by Governor Mike Huckabee (for Demonstrating Serious Commitment to the Use of Total Quality Principles).

Since then, she has designed and tailored fashions of all kinds:  traditional African clothing, European clothing, formal attire, children’s lines, and even shoes and jewelry.  Her African American line is known as ATOAIA; her European American fashions, YAH.  Her creativity does not stop there, however.  And she has still more dreams for the future of her fashion design endeavors:  (1) to run a small factory (with about 5 workers) to mass produce her fashion;  (2) to hold an open-air fashion show that would have singing, poetry; and (3) to teach sewing.  So maybe her pursuits will come full circle with her original plans to teach.